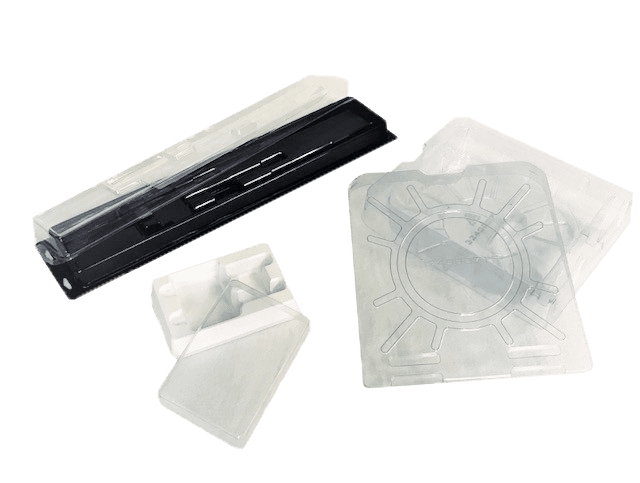 FormTight produces many different types of custom plastic thermoformed protective packaging trays which are used during the manufacturing process to transport product from one process to the next, or from one facility to another. Plastic protective trays can be produced from a variety of materials, including but not limited to High Impact Polystyrene Sheeting, ABS Plastics, Polyethylene (PET), PVC, ESD PVC, RPET, and PETG. Tray thickness is dependant upon durability requirements. FormTight has produced plastic protective trays as thin as .015" and as thick as .500".

Customers commonly utilize thermoformed trays as protective packaging that aid during the shipping process. When dealing with these projects, we investigate creative ways to ensure the trays have denesting capabilities. This will allow the trays to stack onto each other (or potentially connect to one another) and add another layer of protection during transit. FormTight has made many thick gauge protective dunnage trays that easily transport heavy industrial parts.

Heavy gauge thickness is normally no less than .125" and can be as thick as .500". These thick gauge protective trays can be as large as 60" x 84" and up to 30" high. Cradling features are usually found in this type of tray. We can also add features such as straps, hold down blocks, foam inserts, etc. to help secure your product for safe transport.